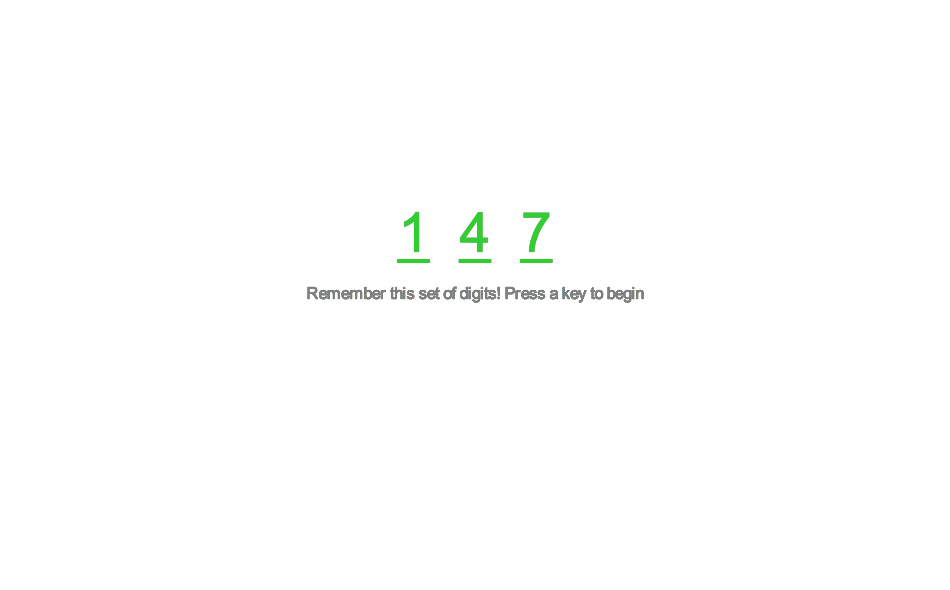 Until the mid-1960s, studies of memory typically investigated what factors caused memory performance to break down. In a seminal set of papers, Saul Sternberg (1966; 1967; 1969) of Bell Laboratories in New Jersey demonstrated that studying error-free memory could be informative as well, by using reaction time (RT) as the main dependent variable. In Sternberg’s memory scanning paradigm — also known as memory search or item recognition — the subject is first shown a memory set of items to remember. The members of this set are most often simple, easily remembered elements such as letters, digits, shapes, pictures, and words. The primary independent variable is memory set size — how many items a subject must remember. On each trial, a test stimulus is presented, and the subject’s task is to indicate whether the test stimulus is one of the items in the memory set. Responses are typically made by pressing a button with one index finger if the stimulus is in the memory set, and pressing a button with the other index finger if it is not. A robust finding in memory scanning studies is an approximately linear increase in RT as memory set size gets larger. Additionally, the slopes of these set size RT functions tend to be equal for responses to items in and out of the memory set. Such results originally led Sternberg to propose a model of memory scanning in which the items in the memory set are searched serially, or one at a time. Considerable debate has since ensued over whether the memory search process is indeed serial or if multiple comparisons occur simultaneously. Another controversial assertion of Sternberg’s was that the memory set items are checked exhaustively, i.e., all the memory set items are checked on each trial. However, findings such as serial position effects cast doubt on the plausibility of a purely exhaustive search. Numerous models have since proposed a self—terminating search, in which scanning stops once a match has been found. Memory scanning has been a very influential paradigm, inspiring thousands of studies on the nature of working memory. Aside from memory set size, other independent variables often manipulated in memory search experiments include stimulus type (e.g., letters, digits, or pictures) and method of memory set presentation: fixed (the same set is used for an entire block of trials) or variable (a different set is presented before each trial).