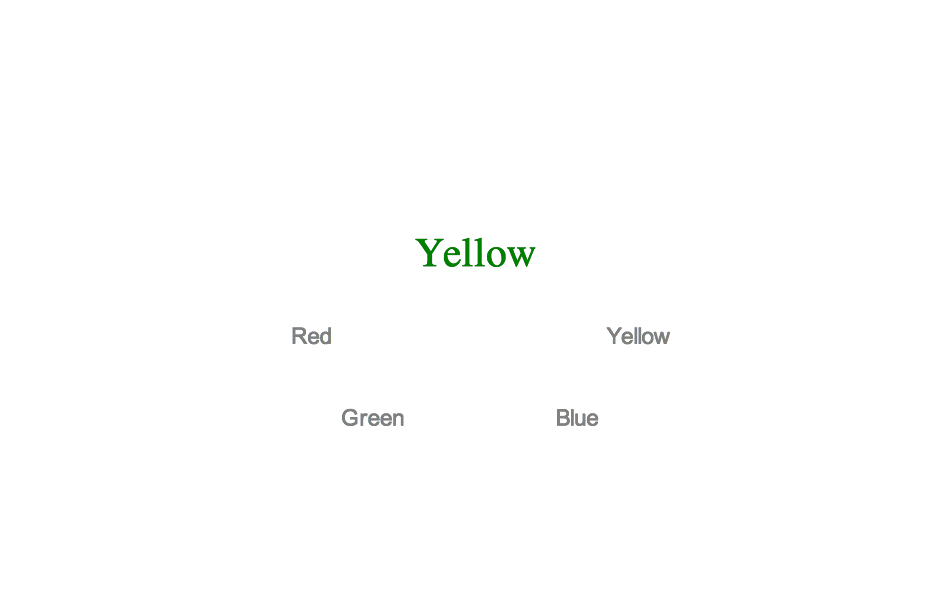 The Stroop color-naming task is a very influential paradigm in cognitive psychology, elegantly illustrating concepts such as automaticity and interference (Stroop, 1935). Numerous versions of the Stroop task have been studied, and the Stroop effect is one of the most robust in psychology: When asked to report the “ink” color in which a stimulus is displayed, people are influenced by what the stimulus means even if they are told explicitly that the meaning is irrelevant. For example, subjects report that the ink color of a word is blue more quickly if the stimulus is “horse“ than if it is “red”. The longer reaction time (RT) to words whose ink color and meaning are incompatible (e.g., “red”), relative to those whose meaning is neutral with respect to its ink color (“horse“), is termed Stroop interference. The shorter RT to words whose display color and meaning are compatible (“blue“) than to neutral words (“horse“) is termed Stroop facilitation. Although the magnitude of Stroop facilitation is much smaller than that of Stroop interference, both effects have been observed repeatedly in numerous variations of the paradigm for over 60 years (MacLeod, 1991).

The finding that word meaning influences RT even when subjects are told it is irrelevant demonstrates the automaticity of reading. Despite being clearly instructed to ignore word meaning, people can not help but read the words. In their daily lives people are constantly bombarded with words — in books, on street signs, on billboards — and the correct reaction to these words is to read them. In psychological terms, the association between the stimulus (word) and response (read it) has become so strong that it is now automatic and cannot be disregarded.

The difference in RT to compatible, neutral, and incompatible color words demonstrates that two attributes of a single stimulus can interfere with each other. The two attributes in the Stroop task —the relevant ink color and the irrelevant word meaning — both get processed. When they each activate different responses, interference results in longer RTs to incompatible words. When both attributes activate the same response, activation of the correct response is facilitated, resulting in shorter RTs to compatible words.